From Prehistoric Chewing Gum to Voiceover 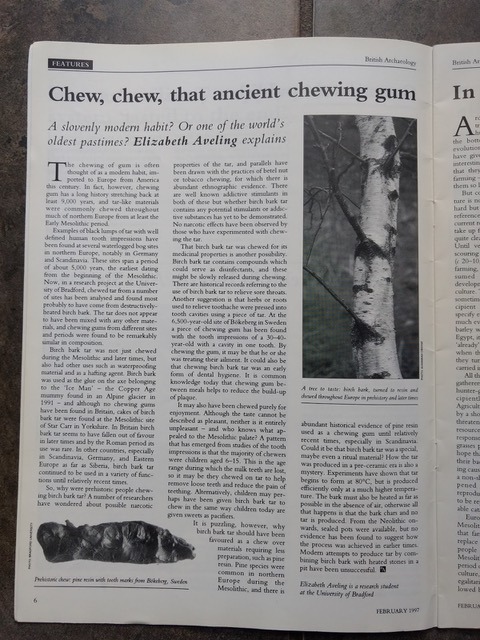 Back in 1997 I was a PhD student at the University of Bradford. My field of study was Archaeological Science, and I was looking at natural products (tars and resins) that had been used in the Mesolithic period (5, 000 – 10,000 years ago) as glues and waterproofing agents. These kinds of materials are only preserved in anaerobic conditions (lacking oxygen), such as water-logged bog sites, and so most of the material I was interested in was located in soggy Scandinavia.

I spent three weeks during the first year of my research travelling around Demark and Sweden collecting samples to study, and during my travels I came across a number of lumps of tar with human tooth impressions in them – chewing gums. Quite what the purpose of these lumps of tar was, nobody really knew, and so I wrote an article covering various hypotheses which was published in the magazine British Archaeology. 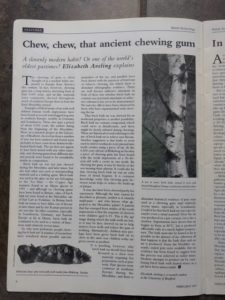 The article I wrote for British Archaeology.

To this day I don’t know what precipitated the ensuing media storm – maybe it was just a slow news week, but as soon as the article was published I was in demand. My work was reported in The Times, The Daily Telegraph, The Guardian, The Daily Mail, The Daily Express and several local papers. I was also the first person from the university to appear in the Chinese press! I was interviewed on Radio 1, Radio 4, Radio 5, a number of regional stations, and even a station in South Africa (which I had to do over the phone at 6am). The Discovery Channel in Canada ran a story on my work, though I have never seen the broadcast as the VHS tape they sent me wouldn’t play on UK equipment.

An American student who was working in the same lab as me at the time was hugely excited because his parents rang to tell him that Bradford University (and my work) had been mentioned by Jay Leno on the Tonightshow. I don’t think I appreciated at the time just what a big deal Jay Leno was!

This crazy media circus lasted about two weeks, and during this time I was constantly up and down to the University PR department to record radio interviews in their studio. Consequently I got to know the PR staff quite well, and they soon roped me in to helping out with promoting the university by writing articles for their magazines, and manning one of the university’s stands at the Tomorrow’s World Live Exhibition at the NEC.

One very unexpected (and very gratifying) outcome of all the attention, was I was approached by the editor of the News & Views section of the top science journal, Nature. He liked my writing style and asked me if I would write for them as their Archaeology correspondent. Of course I agreed! There weren’t often stories from the world of Archaeology that were suitable and not everything I put forward was accepted, but I did have two articles published. 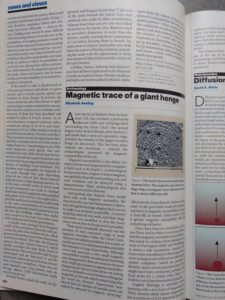 One of the articles I wrote for ‘Nature’

I enjoyed this little foray into the world of PR and media, and decided it might be a field I would enjoy working in. However, I was also interested in education within museums, and towards the end of my PhD I began working at Eureka! the  science museum for children in Halifax. This was a temporary role to organise their summer programme, but they would have kept me on, had I not then got married and moved away.

At the time of our wedding neither my husband nor I had a permanent job, but on our return from honeymoon he had invitations to three interviews which resulted in two job offers. He decided to take a research position with Cristal, a chemical manufacturer on the Humber Bank and we moved to North Lincolnshire.

As North Lincolnshire is not somewhere you ever pass through unless you’re going there, it was a part of the country I didn’t know at all. I thought I would contact all the museums in the area and see if I could find work. It turned out that there are not many museums in Northern Lincolnshire, and those that there are didn’t have any vacancies.

So, it was back to the drawing board.

My husband’s HR Manager knew that we were new to the area and so he told my husband to invite me in for a chat. Barry knew lots of people in the area and felt sure he could help me find something to do.

When he asked me what I was interested in I explained that I would have liked to have worked in museum education, but I had already explored that avenue and drawn a blank. He asked what else I would like to do, and I remembered how I’d enjoyed my few weeks in the media spotlight, and said that I might like to do something connected to PR or the Media.

Barry immediately put me in touch with a contact of his who ran the local cable TV station – in Immingham. Immingham! Who knew there would be a television station in Immingham?!

I went along to meet the MD, a very enthusiastic chap by the name of John Trevitt, and he showed me around his state of the art facility. It was IMPRESSIVE. European funding had paid to turn an old school into a television studio, and the equipment was top notch. I was very excited by the possibility of working in television – there was just one drawback – there were no jobs available. BUT, the station was being run on a shoestring, and they were more than happy to take on volunteers, so that’s what I did. 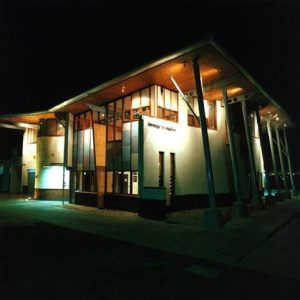 I joined Immage 2000, the home of Channel Seven, as a volunteer receptionist, and after about three weeks I was offered the position. It wasn’t what I wanted to do, I was rather over qualified to be a receptionist, but I was doing it for nothing and I decided I might as well get paid for it!

A couple of months later, auditions were held for new volunteer presenters (I told you it was run on a shoestring). I hadn’t put my name down, but I mentioned to my husband as I was getting ready for work that morning that this was happening, and he told me I should have a go.  I told him it was too late because all the audition slots were full, however, when I got to work it began to snow, and several would-be presenters cancelled their auditions. I seized the opportunity to ask the producer if I could have a go. He agreed, and after my screen test I was selected as one of the channel’s new presenters.

I began to do a little presenting now and again – usually recording links for magazine programmes when the regular presenters were unavailable.  I couldn’t do anything very regularly though because I was tied to the reception desk, which I began to resent. After about a year I had had enough. I was sick of people being rude to me (don’t be rude to receptionists – it’s usually not their fault), and I was bored. I was offered another job as a journalist for a local business publication, and I was on the verge of leaving, but the MD persuaded me to stay. He had applied for a large European grant, and if it came off, there would be a better job for me, so I crossed my fingers and stayed.

Fortunately the grant did come to fruition, and I was promoted. My new job involved researching, producing and presenting a bi-weekly live magazine programme called Community Express. I would interview guests live on air in the studio, and during the rest of the week I would go out and about filming in the community.

I had a ball! I interviewed Patricia Hodge when she came to Cleethorpes, I had a go at grass track racing a beat-up Mini at Blyton airfield whilst commentating on the race, I went out on the RNLI’s inshore lifeboat and filmed a man overboard exercise in the middle of the Humber…..there were so many great moments, and sometimes I couldn’t believe I was getting paid to have so much fun!

As part of my job I sometimes had to record voiceovers. These were for adverts for the channel, for short documentaries we made, programme promos etc. I also recorded numerous modules for an early online GCSE revision programme called the Open Schools Network.

I never had any formal training in any of what I did – the presenting, the interviewing, or the voiceover work – I just found it was something I enjoyed and something I could do.

My contract only lasted as long as the European grant funding, and when it came to an end I was pregnant with my eldest son and about to take maternity leave anyway. I wanted to go back part time after I’d had my baby, and my boss wanted me to go back too. However, it was not to be. While I was off the channel was sold to Grimsby Institute who still run it today under its new name of Estuary TV. There was no job for me to go back to, and it was the end of my career in the media. Or so I thought.