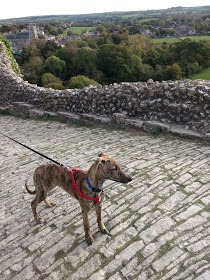 I love cats. I grew up with cats and I’ve always had cats, so when son number one turned out to be allergic to cats it was a bit of a problem…

We had two cats at the time and the doctor’s advice was, ‘when these cats have gone, don’t get any more.’ James was 4, and he had to wait another 11 years before the cats were gone! We lost Chester last year and although he left a huge furry-shaped hole in our lives, I decided to be kind to James and not get another cat (at least until he leaves home).

However, Chester’s passing last year coincided with me being made redundant and becoming a full time voiceover artist, which means that most days I am home alone, talking to myself! I missed having the cat to talk to, and so I decided to get a dog!

The boys have asked a number of times over the years if we could have a dog. Their grandparents have a dog, their cousins have a dog, and they wanted one too. I knew however, that the day to day looking after and walking would fall to me, and while I was working for an employer and out of the house all day, I didn’t feel I could give a dog the attention it deserved. Now however, I am home more often than I’m not, which is a much more dog-friendly lifestyle.

I was adamant that we wouldn’t get a puppy. I didn’t want to deal with house-training and chewing, and so I began to look for a rescue dog. There are plenty out there, but I struggled to find one that didn’t have some kind of issue. As other members of my family have dogs, mine needed to get on well with them, and many of the rescue dogs I looked at didn’t like other dogs. Others couldn’t be homed with children, or required a lot of training.

Then, my accountant, who is also an accountant for a rescue centre posted a picture on social media of a dog that needed a new home. She was an 18 month old whippet, and seemed perfect. We went to see her, we all liked her, and we arranged to take her.

However, the night before I was due to pick her up, I had a message from the rescue centre to say she was no longer available. The reason I later discovered was the dog was so lovely that the rescue centre owner had decided to keep her for herself! We were all a bit shocked at this behaviour, but clearly this dog was not meant to be ours.

I kept looking, and after a week or so I found Marble. He wasn’t what we wanted at all. He was a 14 week old puppy, male (we’d really wanted a girl), and a lurcher whose final size is unclear (we didn’t want a large dog). He is also perfect 🙂

He has a rather sad story behind him. He had been living with a family for two weeks, who had spent a long time looking for the ideal dog, and loved him to bits. He’d been bought to grow up alongside a new baby which was due in two months time, however, the mother-to-be had very sadly been diagnosed with brain tumours. She was going to find it difficult to cope with a baby, alongside her treatment, let alone a puppy, and so the dog had to be re-homed. There were many tears on both sides when we took him away, but Marble quickly settled into his new home with us.

Marble is a brindle-patterned, long dog with a pointy face. His mum was a whippet and his dad was a lurcher. As his previous owner had been diagnosed not long after he arrived, she hadn’t managed to get his vaccinations done. We had to start from scratch with this, and so he was 18 weeks old before he could go for walks, which is rather late, and the first four weeks when he was confined to the garden were hard work.

We’ve now been going for walks for 5 weeks and I love it. It’s great to have an excuse to go outside – even when it’s cold and raining. Being in an enclosed office and recording studio all day is nice and cosy, but I’m sure its not great for your health!

Thankfully Marble is generally a quiet dog. He sits in his bed in my studio, or just outside the door, and lets me get on with my work. He was already partly house trained when we got him, so that was quite easy. He does like to chew but I crate him when I go out to save my kitchen from destruction! As a whippet/lurcher he is very flexible, so even if he grows big, he’ll still curl up quite small, so even though we tell him he’s the wrong dog, he’s not really 🙂

Having a studio assistant is much more fun than working alone. The dog makes me laugh with the ridiculous positions he sleeps in, and the mad way he chases his toys about. Now that I’ve got Marble, I wouldn’t be without him.