The Voiceover Kit I Use in My Home Studio

Home » Blog » The Voiceover Kit I Use in My Home Studio 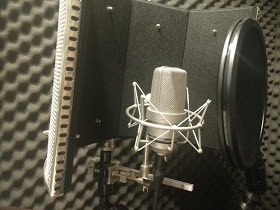 If you’re the sort of person that likes technical kit, then being a voiceover artist might be the kind of job you’d like. Personally I’m not really very interested in gear – I know what I need and I’ve got what I need, but I’m not someone who has to have the latest gadget!

That being said, I do often get asked about what equipment I use, so I thought I would write a blog post about the various microphones and so on that I use in my business.

For voiceover, the type of microphone needed is a condenser microphone with a cardioid (heart shaped) pick-up pattern. Some microphones have a switchable pick-up pattern and can be changed, for example, from cardioid to an omni-directional pattern (where the mic picks up in all directions). Definitely NOT what you want for voiceover where you only want it to pick up what’s coming out of your mouth into the front of the mic, and not unwanted noises from elsewhere, or reflections of your voice coming into the back of the mic.

When I first started out in voiceover I initially bought myself a good quality USB condenser microphone that I could plug straight into my computer. These can be bought relatively cheaply and as I was just dipping my toe in the voiceover water, I didn’t want to spend too much at the beginning.  The mic I chose was an Audio Technica 2020 which cost me about $100 (£70). This came with a little stand and a case to keep it in, and as a first microphone it did its job. It’s not the sort of mic that a professional voiceover artist would use on a daily basis, but I got me started and I did do quite a bit of work with it. Here’s a link to a short video about this microphone.

After several months I upgraded to the mic that I use now which is a Neumann TLM103. I was living in America at the time so I was able to go to my local Guitar Center shop and try out a number of microphones at once. I tried a Rode, a Shure (I forget which models), and the Neumann. It was the most expensive of the ones I tried but I liked the way it made my voice sound. At the time I think I paid around $1200 (£900) for the mic and shock mount, which came with a flight case (a good thing as I was taking it back to the UK on a plane). The TLM103 is used by many voiceover artists – it’s quite an industry standard really – which was something else that attracted me to it.

The Neumann mic doesn’t connect directly to my computer – it needs an audio interface. I use a Focusrite Scarlett 2i2, which many other voiceover artists use too.  An XLR cable connects my microphone to the interface, and then the interface is connected to my computer. Here’s a link to a quick video about this microphone.

The software that I use for recording and editing is Adobe Audition. To begin with I used Audacity because it’s free, and it was ok as a starting point, but it doesn’t have the functionality that Audition has. The downside to Audition is you can no longer buy it outright – it’s only available for a monthly subscription, but I suppose at least you always get the latest upgrades…

I have one more microphone, which is an Aston Spirit. This is the mic I take with me when I’m travelling. Again it’s a condenser mic and reviews suggest it has similar qualities to the Neumann – but for less than half the price. That’s why I bought it. I wanted something that wouldn’t make me sound too different, but I didn’t want something very expensive in case it got damaged in transit. I use it with a slightly smaller interface – the Focusrite iTrack Solo, which is more compact for travelling. Here’s a link to another video about this microphone.

Having spent several years building makeshift ‘pillow forts’ in hotel rooms in order to record when away from home, I have now invested in a portable recording booth.  The Vocal Booth To Go is a brilliant piece of kit that folds up flat when not in use – I’ve even taken it to America with me! 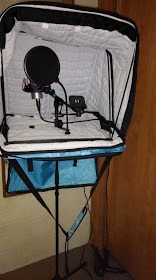 Another piece of equipment, which is essential for voiceover work, is a pop shield or pop filter. This is placed in front of the mic and its job is to protect the microphone from the harsh blasts of air that can be made when pronouncing sounds such as ‘p’ and ‘b’. It’s just a thin mesh stretched over a frame, and if you should ever find yourself in need of such an article, a makeshift one can quickly beassembled from a wire coat hanger and a pair of tights!

The last pieces of kit I use are my headphones and studio monitors (speakers). I have some quite expensive (and very comfortable) Beyerdynamics as my main pair for editing work, and a second pair of Studiospares cans that I use with my travel kit. I don’t record with headphones on when I’m recording myself – I just find they get in my way, and I spend long enough with cans on my head when I’m editing! The monitors I have are KRK VXT4s. Studio monitors are not the same as the speakers you’d use with your music system as the response from them is quite different. When you’re listening to music you want to enhance some frequencies to make it sound better, but for voiceover work you need it to sound more real. That’s the simple version anyway. 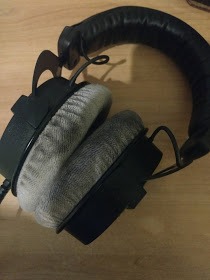 Of course the end user may be listening to my voice on a cheap pair of ear buds, tinny computer speakers, or even down a telephone line, so they might not appreciate the effort that went into making a quality recording – but at least I know it sounded good when it left my studio!

I know I’ve mentioned my home studio in the past, but for completeness, and for those of you who don’t know, I have a gold series vocal booth from VocalBooth.com. I read somewhere that Madonna has one the same…It’s 4’ square and rather like a tardis (only smaller on the inside). The inside is covered with acoustic foam to absorb sound reflections, and the thick walls and door keep out unwanted noise from outside. My children can be in another room watching television or playing video games, and I don’t hear it. Bliss! 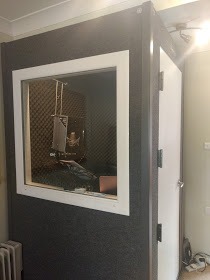 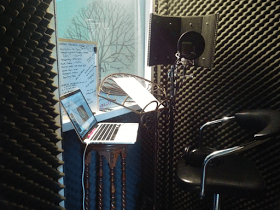