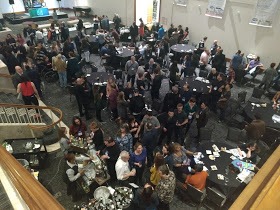 I’ve been to a couple of voiceover conferences in the UK before, but nothing quite on the scale of VOAtlanta. This was the biggest voiceover conference in the world – ever! With over 600 delegates including voice actors from across the voiceover spectrum and 12 different countries, casting directors, talent agents, coaches, and equipment manufacturers, we took over an entire hotel – and then some. BUT, when you consider that some industry conferences attract thousands of people, it just shows what a niche industry we are – and that our talents are quite unique.

One of the recurring themes of the conference is that we should know our worth – and given that not everyone can do what we do, we should be able to command a decent fee for our work. However, the industry has seen a downward trend in rates over recent years, with people setting themselves up on the likes of Fiverr with a cheap mic and providing voiceover services for next to nothing. However, you do tend to get what you pay for, and sometimes you can spend more on correcting something that’s been done wrong, than getting it done right in the first place!

The delegates at the conference not only represented every genre of voiceover from commercial to animation, and eLearning to explainer videos, and everything in between, they also represented every career stage too. There were beginners who were just starting out and had yet to create a home studio, through to seasoned professionals who had been working in the industry for decades. No matter the level of their experience or voiceover ‘fame’, everyone I met was, without exception, kind, generous with their knowledge, and eager to learn – yes even those that have been in the industry a long time, appreciate that there is always more to learn.

The conference sessions were a mix of panel discussions, workshops, talks and breakout sessions, with some fitness and meditation sessions for the (very) early risers, substantial lunches, and evening entertainment. To say it was full on would be something of an understatement!

The keynote address was given by Townsend Coleman (forever the voice of Michelangelo in the Teenage Mutant Ninja Turtles to me), who at the end admitted he had been afraid of public speaking. You would never have known.

It was very difficult to choose which sessions to attend, as there was so much choice, and often several things on at the same time that I would like to have gone to. As I had arrived early (in an attempt to recover from the jet lag before the conference started), I had the opportunity to sign up for an extra session, pre-registration. Initially I had chosen a session about the conversational read (very fashionable) and improvisation, but it was full, and I registered instead for Thom Pinto‘s class on documentary narration. I’m so glad that I did. Thom was an excellent teacher, and he had clearly done his homework on his pupils before the class, because the scripts that he gave each of us, suited our delivery styles. The first script he gave me was about a chess genius, and the second was a nature documentary which I loved reading. Thom gave me some good feedback, and after the session several of my classmates told me how much they had liked my reads too. I have since signed up to do a private coaching session with Thom, with a view to making a demo in documentary narration and trying to get some work in this field, so taking his session was definitely serendipity.

Other sessions I attended included talks on voiceover for eLearning (which constitutes a good chunk of my work, so it was good to hear that this field is expanding); voiceover for Virtual Reality (an up and coming area of work): using LinkedIn as a voiceover artist; Marketing; how to approach agents and more.

In addition to the sessions, there was also the opportunity to sign up for the 5 minute ‘talent screening’, which was like a mini audition in front of an agent or casting director, who would then give you feedback on your performance. About ten minutes before my slot I was given a couple of sides of scripts to pick from and quickly practice before the audition. Nobody knew who was going to be behind the door when they went in, but I was fortunate to have Jeffery Umberger, who is a talent agent based in Atlanta. I read an extract from an audio tour for him which he liked, and then he picked another script for me to read from cold. He gave me some direction to improve it and seemed happy with the new read. Jeffrey said he hoped I would send him my demos – which I have!

Th learning went on well into the night, and one of the most useful sessions was David Goldberg’s audition workout from 9pm to 11pm on the Saturday night. This was pitched against the VOAtlanta 70’s themed party, so unsurprisingly only about 10% of the delegates attended, but it was SO worth it. David is the CEO of Edge Studio – the company that I did my initial voiceover training with – and he has an incredible gift for being able to listen to reads and instantly hear where they could be improved. For two hours he had a stream of willing volunteers read for him and the audience, and he critiqued and improved every one of them. Um, except for mine actually – which was very gratifying.

A few hours after the conference had finished on the Sunday afternoon, I was chatting to a couple of other British attendees, and we all agreed that we probably won’t know what we got out of the conference for a few months. There was so much information to take in (more than one person described it as like drinking from a fire hose), that it will take some assimilation and implementation of new ideas before we see an impact on our businesses. I feel sure there will be an impact though.

VOAtlanta was utterly exhausting, exhilarating, and the biggest confidence boost I could have wished for. I came away feeling that I AM in the right profession, that I DO know what I’m doing, and privileged to be part of such an amazing community of generous and giving people.